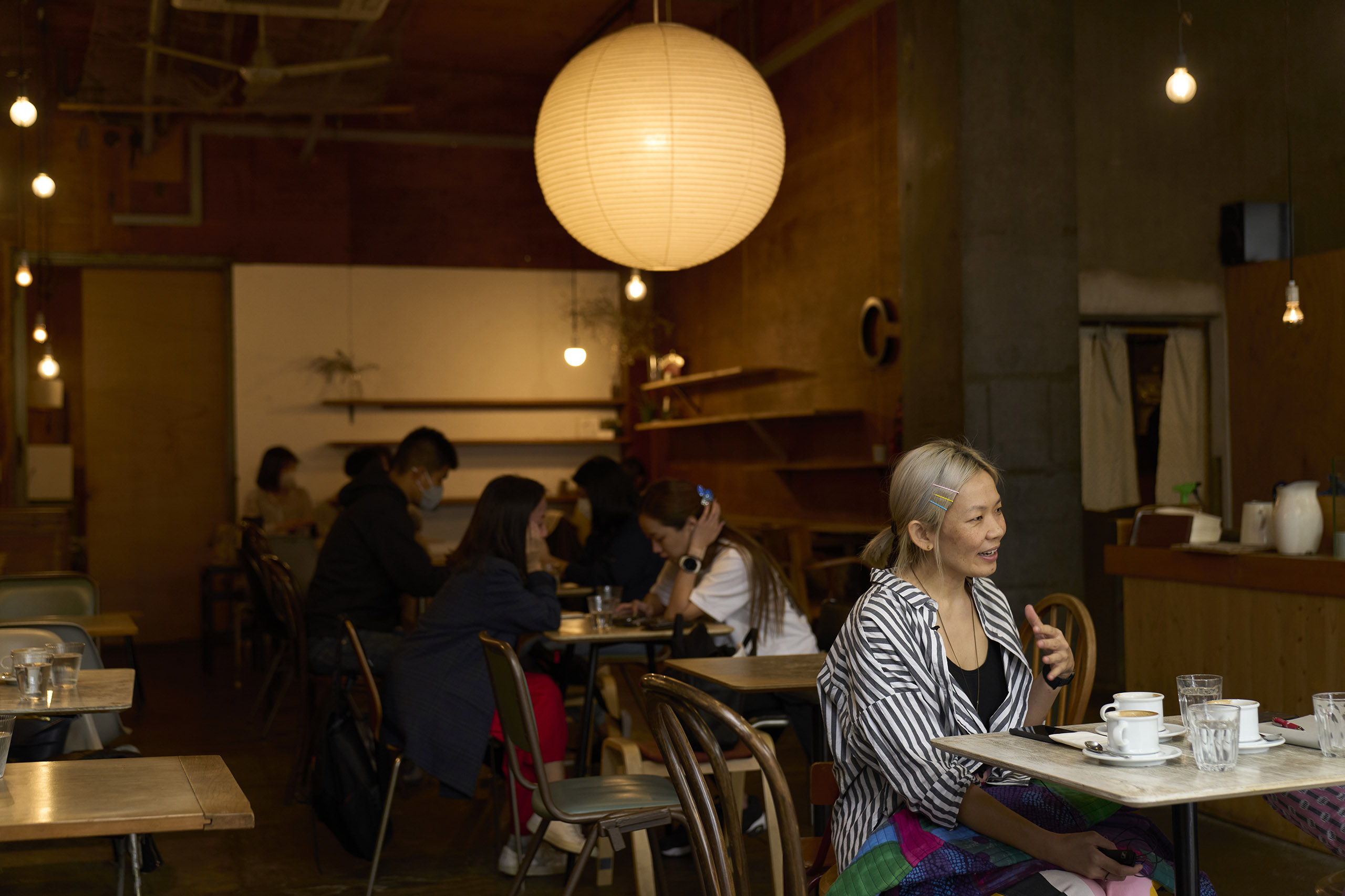 Whimsical and colourful, Grace Lee’s work draws out the magic from our otherwise quotidian world. Immediately recognisable by her quirky lettering style and vivid palette, her drawings of landscapes, objects, and people can be found gracing magazines, catalogues, and products in Japan and around the world.

Grace grew up in Sydney and is now based in Tokyo as an illustrator, using a mix of pencil, Copic markers, and Photoshop to create textured scenes of life for advertising and commercial settings. Over a decade ago, she left her career as an editorial designer, moved to Japan, and eventually became a full-time illustrator — building up an impressive portfolio of clients over the years, including Uniqlo, Lululemon, and ELLE Magazine.

For the cover art of our inaugural physical volume, we asked Grace to draw “Tokyo” based on her own experience of living in Japan’s capital. She responded boldly, creating a vibrant panorama of everyday life in Tokyo that is deeply personal, yet familiar for those who have spent time in the city.

We met Grace at Melbourne-inspired café CIBI in Sendagi, housed in a former Yamato Transport warehouse tucked into a relaxed shopping street, home to izakayas and mom-and-pop stores. With high ceilings, exposed concrete, and plywood walls, CIBI is a beautiful space selling healthy Japanese-Australian brunch food and a curated range of Japanese crafts. Opened in 2008, it has become a key community spot for locals and visitors alike in this historic Tokyo neighbourhood.

Sipping flat whites while munching on chicken sandwiches, we discussed the inspiration behind the cover art, her volunteer work, and her recent foray into ceramics.

This interview has been edited and condensed for clarity.

Let’s start from the beginning — why did you choose to become an illustrator?

Being in Tokyo makes you feel like anyone can be an illustrator. You walk around and you see all these cute little drawings that could have been drawn by anyone — not necessarily made by a designer or a branding company. Some people would say, “Oh, a child could do that” or “That's just so simple”. But what’s cool is that it’s accepted here, and that's fine. Living in Tokyo gave me the confidence to try.

How would you describe your illustration style?

It’s hard to pin down something concrete as the technical style can vary depending on the brief, but it has to have colour, movement, and something weird in it.

I was wondering if you could outline the process behind how you make your drawings? For example, the cover for Volume 1 of sankaku. How did you start?

First, I wrote down initial ideas about what I thought of Tokyo. So taxis, everyone knows, but Tokyo to me was: old people, small dogs, mailboxes, seasons, roads, old shops, the hidden torii arches found at Shinto shrines, contrasts, nature, bikes, people, noise …

But then I also wrote things like couriers and service, because everything that I think about with Tokyo is service.

Are you referring to omotenashi (the Japanese concept of hospitality)?

Yeah, sure — but also the service that no one pays attention to. Like how tough is it for all those Yamato or Sagawa courier guys? Yeah, I feel for them. That's what I think of when I think of Tokyo. I think a lot about service because … that's really what moves the city.

That’s true, from the public transportation system to the restaurants and bars. You’ve also added a lot of other people and objects in the drawing too.

I knew I wanted some kids in there, and some laundry as well. They're all drawn separately. It’s an evolving process where I start by hand, colour it, and then layer it together in Photoshop after scanning it.

The drawing as a whole though — I just knew I wanted it to move in a certain way, like in an S-shape, and have different layers with nature and buildings. How I work is maybe a little bit different to others. I don't plan the end design. I just think about what I want in it, then move it around, and see what comes of it.

Yeah that's real. It's somewhere in Adachi. I added it there because Tokyo is one of those places you could be walking in like a business district, and suddenly there's a playground — I thought it was a really cool and funny thing to bump into.

And then there’s a shrimp on a truck too—

Oh that's real too, I saw that in Shinjuku! I drew a picture of that before as well, ages ago. I wanted some of my old drawings of Tokyo to appear in this new version.

I’ve also added other small easter eggs. You know how there's heaps of wasuremono [lost articles] lying around in Tokyo? You will see things like a glove, sock, or shoe lying around that people have found and left ready for the owner to come back and collect it.

You kind of feel sad for the objects waiting to be found. Just these little small details are what I love about Tokyo.

Yeah, these small details are really characteristic of everyday Tokyo — something you start to notice when you live here.

Most of the things on there are from photos I took on my phone. I take lots of pictures, mostly things or details that I like.

When most people talk about Tokyo, it's usually about the amazing architecture, the atmosphere, the buzz, the food … but that's why I liked seeing your interviews, because they were about the unseen people.

For me, the laundry is the main thing, because I notice that all the time — when you're walking around seeing futons hanging outside, like they’re saying hello. Maybe not Tokyo's “best” feature, but I love it because it lets you know that there's humans out there.

With drawing, it’s as if something comes out as an extension of yourself, whereas with clay, you have to work with it like a teammate.

My ceramics teacher Sofia Solamente has this great saying, “How is the clay behaving today?” You're teaching the clay how to move by the pressure you're putting on it and the way you shape it with your hands, but you are also reacting to how it's behaving on that day.

You can’t just force it to take shape. It really humbled me.

What else have you picked up recently?

I started volunteering at this food bank called Second Harvest. I go once a week to help the team sort food that is donated or leftover from supermarkets, then pack it into bags so people can come and pick it up in the afternoon.

It really feels like I'm “going to work” once a week. With illustration, you’re by yourself a lot, but with volunteering, I see the same people every Tuesday. Many of the people there are women too, and they’ve all got really interesting, cool lives so it’s been awesome to get to personally know them.

It's just changed my whole outlook and makes me happier. I genuinely can say I really like living in Tokyo now.

I don’t think charity is necessarily well received in Japan. I guess there's still some stigma attached. Because of this, several years ago, I heard that they redesigned the food pantry so it looked more like a supermarket, and customers could pay for their food by doing a good deed. I like this idea of give and take. It’s what volunteering feels like —  you get as much out of it as you give, if not more.

During the beginning of the pandemic, I was really grappling with the purpose of my creative work, questioning whether or not it was really contributing positively to the world.

Now I think it doesn’t have to be volunteering for charity, but even an activity that’s community-based — it always feels really good doing it because you're a part of something.

I think everyone wants to feel like they're a part of something, right? ▲