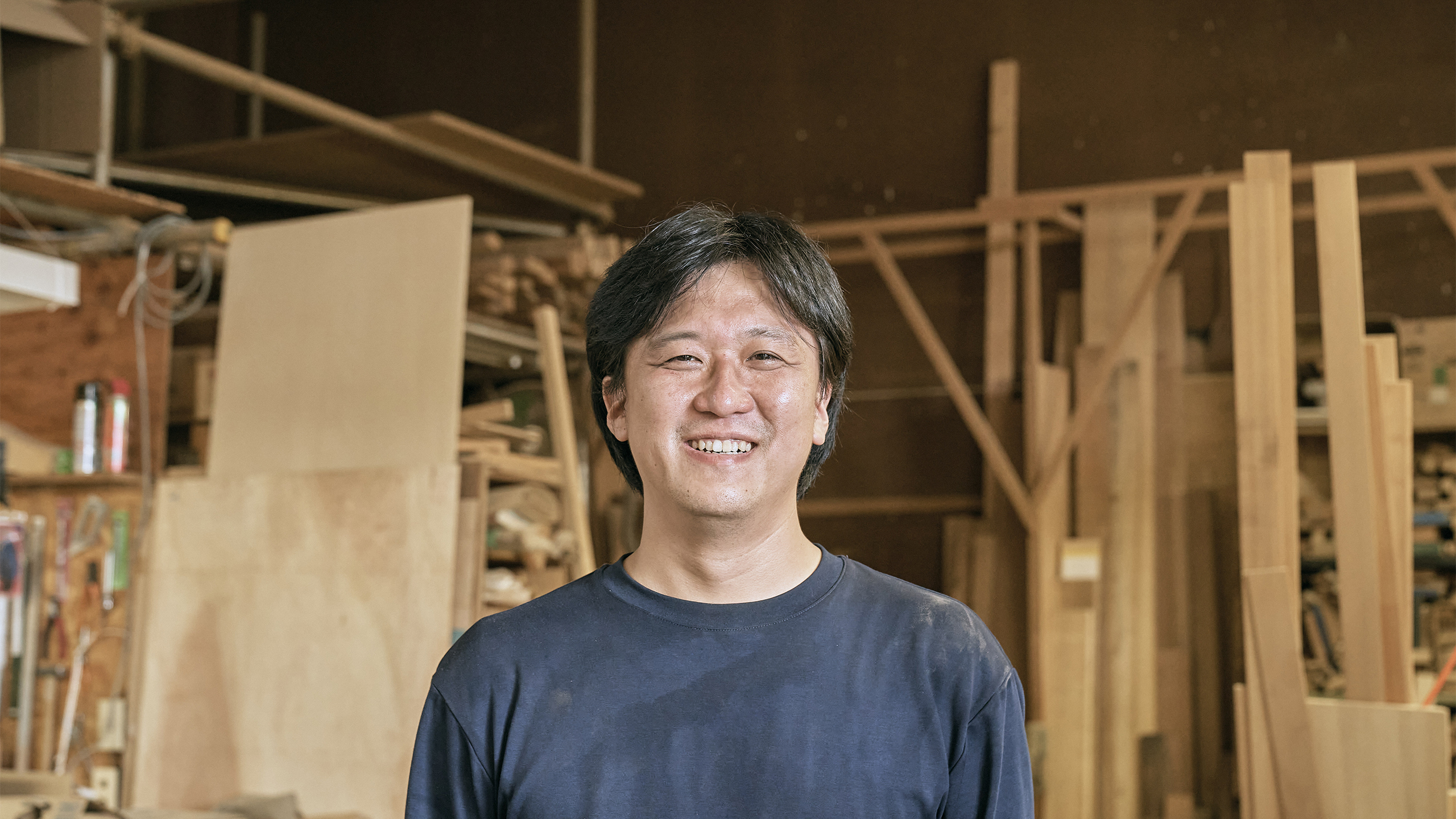 Tatsuo Morikawa rarely makes the same thing twice. Trained as a traditional Japanese woodworker but embracing new modes of practice, he works together with his clients to bring even the most experimental ideas to life. He has worked independently in Kawagoe, Saitama since 2011. His clients seek him out for his depth of expertise and his openness to taking on unusual projects.

Artist Naomi Hirano started collaborating with him in 2018 to create the first chair of her project Stand No More. The two are working on a second piece together and invited us for a behind-the-scenes visit. I travelled to Morikawa’s workshop in Kawagoe where we talked about his path to becoming a craftsman, his process, and his ideal chair.

Why did you become a craftsman?

I was actually interested in pursuing social work at first — I even went to university for that. This came from my experience with caring for my grandmother, who had dementia.

During one of my classes, I learned about an old man with dementia who would tend to wander off and become lost. However, once he sat on his favourite chair, he would be at ease and stop wandering. This got me interested in the power of chairs, and by extension, making furniture. I then decided to go to Hida Takayama to train in woodworking.

Hida Takayama is a region in Japan known for its cultural tradition of woodworking. What was the training like?

Well, I went to a school called Shinrin Takumi Juku in the middle of the countryside. It was only us students and instructors, the woodworking workshop, and the animals outside. The program was a two-year apprenticeship, which meant that we didn’t receive a salary, but our tuition, room, and board were all covered.

During the first year, we only made small objects like photo frames or tape dispensers. The next year, we moved on to building furniture such as tables or chairs, using traditional Japanese woodworking techniques.

Tell me more about these techniques.

I consider traditional techniques to be the art of joining wood together to make a freestanding object without relying on metal parts such as screws or nails. It’s a very strong and stable way of connecting wood.

You can see it at the ancient Japanese temple Hōryūji, which is known as the world’s oldest surviving wooden structure. Back then, buildings were made by leveraging the special properties of wood and combining them with woodworking joinery. These construction techniques were then later applied to furniture-making.

So you officially become a “craftsman” after this two-year program?

Yeah, after that it was time to find work. For me, I got a job at a woodshop in Saitama that made furniture for a famous Japanese luxury hospitality chain, an Italian furniture brand and the Imperial Palace. The woodshop was known for pushing the envelope by bringing challenging designs to life, which often demanded special techniques.

What kind of work did you do at the woodshop?

I worked mostly on making designer furniture. At the time, the woodshop had two departments: one making furniture, and the other working on large custom projects such as furniture for ryokan [traditional Japanese inns]. The Italian furniture brand subcontracted their Japanese-market products to us, so I made everything from beds to side tables. I would also help out from time to time with the other custom projects. I stayed there for five years and then started my own practice.

Why did you want to work for yourself?

I was more interested in seeing the total process — from understanding the client’s wishes to delivering the final product, not just the production aspect.

In the beginning, I started as a carpenter’s assistant, helping build kitchens and other cabinetry for homes. For example, I did projects for architecture studios such as children’s lockers for kindergartens. It was whatever work I could find to keep my hands busy.

How did you find these kinds of projects?

A lot of the work was referred to me by other craftsmen that were using this workshop. As for the carpenter’s assistant job, it was an introduction from a former colleague. Actually, I was all set up to work part-time at the Tokyu Hands [DIY, craft & hobbies] department store. But then my colleague found me this job. As he was my senior, I couldn’t really say no and ended up doing that for a year, hahaha.

Maybe it’s not the best way but even now, after nine years, I don’t really go out looking for new projects. I’ve been blessed with interesting projects that come to me serendipitously.

What projects do you pursue now?

It’s really all over the place. Right now, two thirds of my work comes from about ten companies, and then the rest is from individual clients. For both my work with businesses and individuals, developing original products and furniture together has become a major focus.

One example is my ongoing work with the audio specialty shop Audio Mijinko in Akihabara [in Tokyo]. First, they approach me with a certain concept in mind, such as for a speaker, and ask if it’s possible to make. From there, we go through several design ideas before deciding on the final product. If it’s successful, it becomes part of their product lineup and then I switch to manufacturing mode.

Collaborating with them in particular is quite enjoyable and has led to many new discoveries for me. I used to only think about the structural issues of building with wood, but I learned that the type of wood used also affects the timbre or tone of the sound. That was quite new to me!

You collaborated with Naomi on her first chair, as part of the Stand No More project. What was it like working with her?

Very fun! I think her perspective is quite unique — you wouldn’t make a chair like this normally.

She starts by handing me a pencil-crayon drawing. From there, trying to interpret the concept behind it is a very worthwhile and fulfilling process.

For example, take this chair [below]. There’s a round shape at the top, a rectangular one on the bottom, and then something that lies in between. It’s sort of an abstract composition, you see? Normally, you would consider a chair from a functional perspective, such as how comfortable it is to sit on. However, this is a more conceptual approach and that can’t be quantified easily.

Usually, craftsmen will request the design to have exact measurements, or else they might refuse to work on it. I think there is often a large gap between what clients expect and how craftsmen tend to work. Because of that, it’s important to understand what the desired goal is before putting it into dimensions.

What do you want to make next?

Chairs! A really nice one.

As I mentioned before, when my grandma developed dementia, she became quite confused and disoriented, eventually moving to a care home. However, sitting on a chair helped calm her and when I saw that, I realized the potential of a good chair in helping people ground themselves.

I guess what I am trying to say is that, after years of working with designers and making furniture, I think I have a pretty solid understanding of what makes a good chair, and that’s what I’d like to make.

Is there a chair you have in mind that describes your vision?

It’s hard to put into words, but I guess it would be the chair in American artist Andrew Wyeth’s Up in the Studio. It’s a painting of a middle-aged woman sitting by herself on a wooden chair in front of a window, gazing outwards from an empty room.

Wow, I didn’t expect a painting. What do you like about it?

The fact that the chair serves a supporting role in the painting. I think the architect Alvar Aalto positioned furniture as something like a “life partner for humans” — that’s something I really relate to.

It’s not really about just the shape of the chair [in the painting], but more so how the chair allows the user to get lost in thought. If the chair was uncomfortable to sit on, I don’t think the woman in the painting would have such an expression on her face. It’s still a vague idea, as I don’t have a concrete form for the chair in my head, but I want to make something that can be comfortable and relaxing.

I want to bring this back to where we are now. You’ve been working in Kawagoe, Saitama for almost 10 years. What do you like about working here?

Well, I went to Hida Takayama to learn the way of traditional woodworking, right? But I feel that Kawagoe is not content with just following "tradition", and is instead quite innovative by using tradition to build something new. That really resonates with me.

If you’re just limited to tradition, everyone ends up making the same thing. You can debate endlessly whether that’s right or not, but I don't think that craftsmen back in the day limited themselves to traditional techniques either.

The techniques that they were constantly innovating — I don't think we have to "preserve" them as is. I'm more interested in seeing how to use tradition as a base to do something different. ▲

Part 1 is an interview with Naomi Hirano, a Tokyo-based artist who started Stand No More. 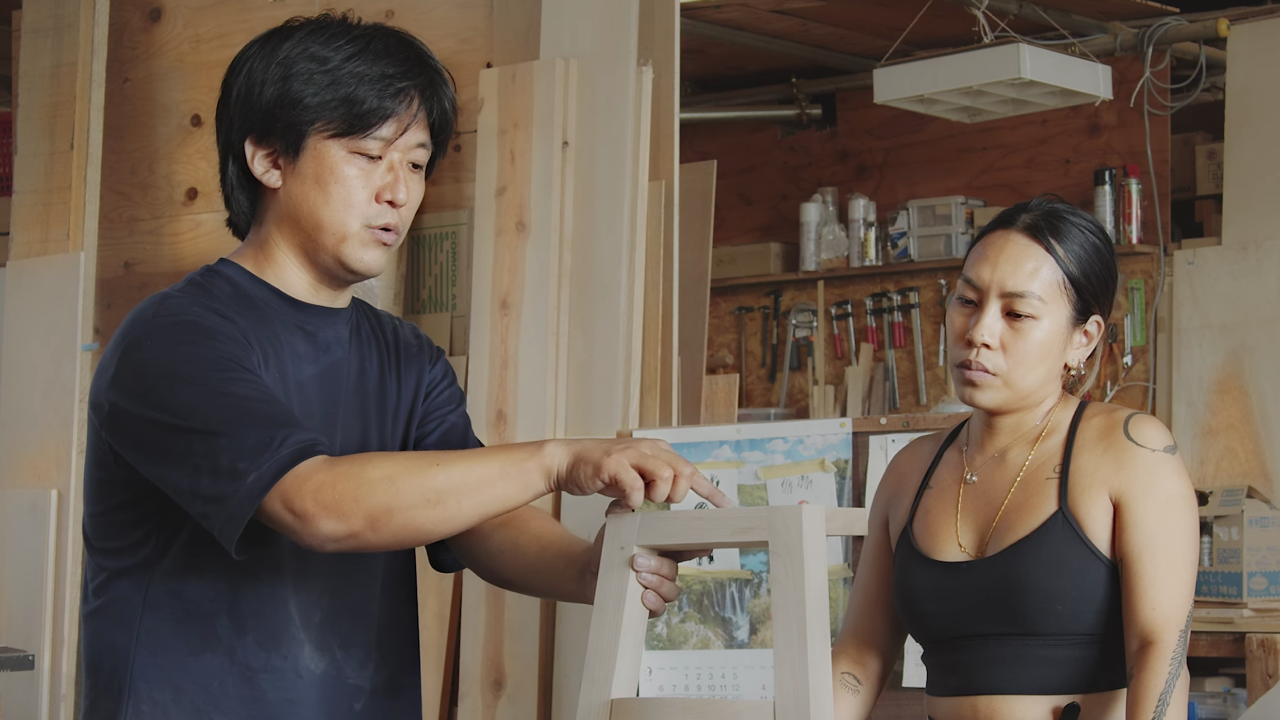 Watch the video
A Conversation with Stand No More
On finding form through dialogue and embracing fluidity in traditional techniques. 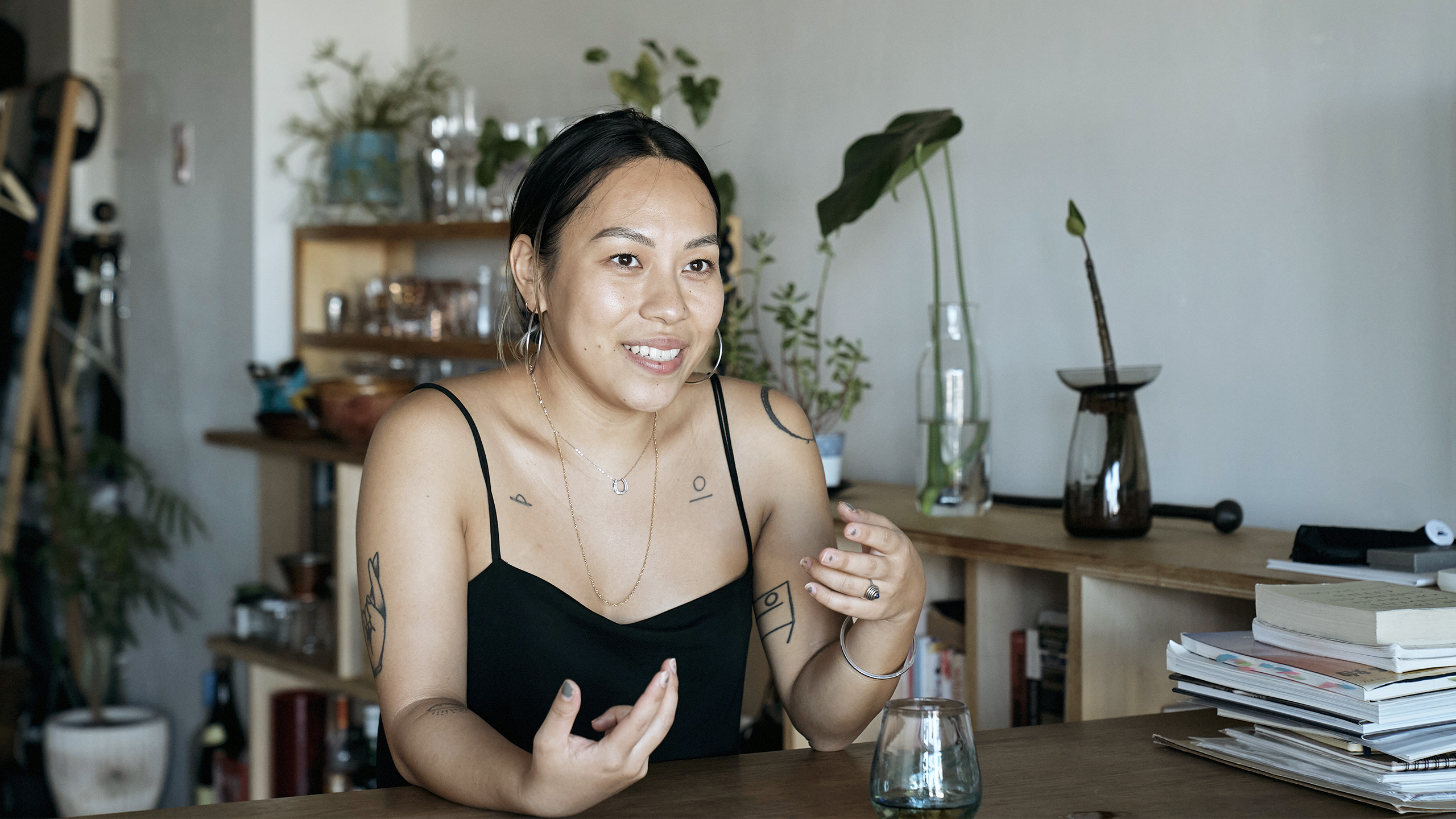