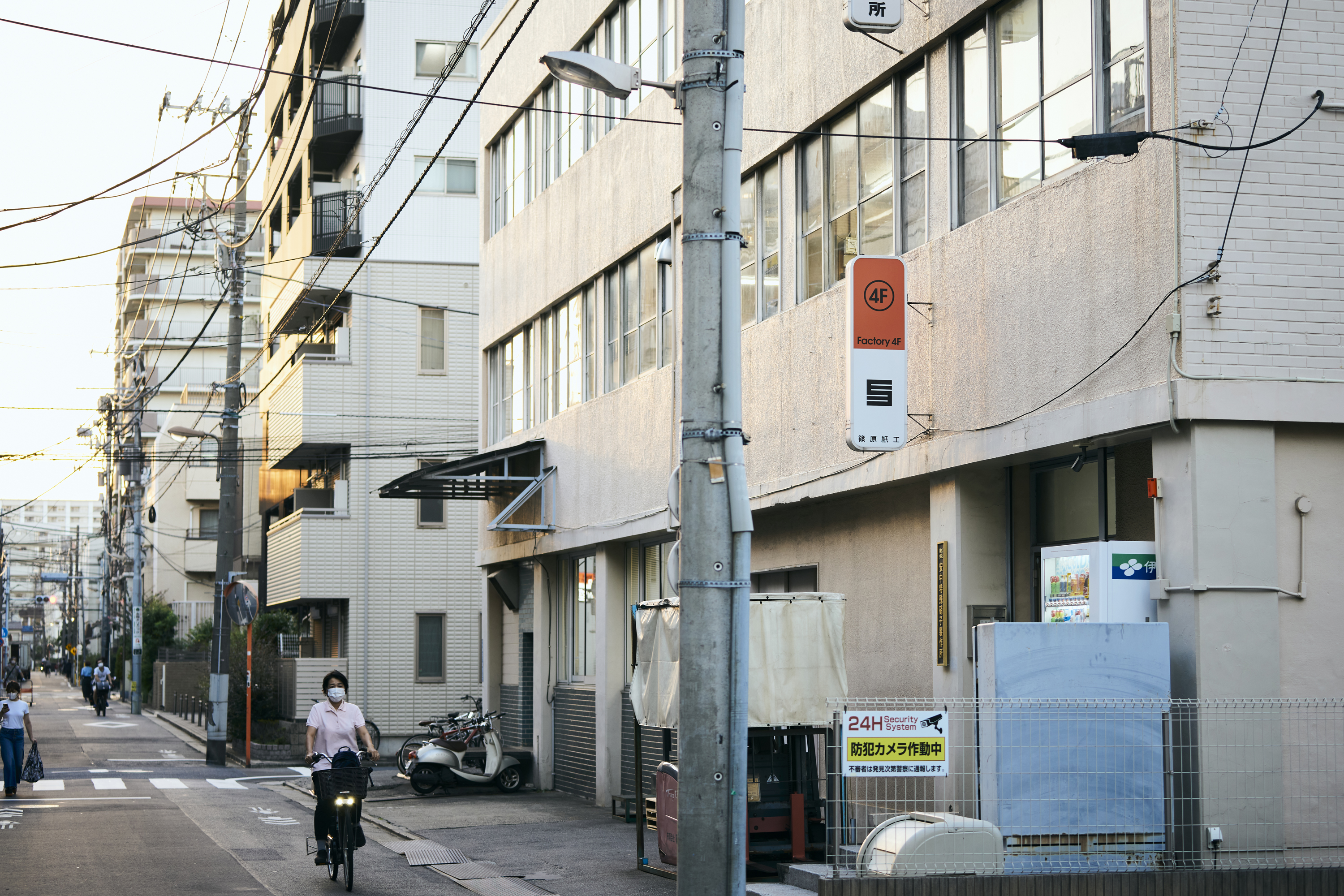 Beginning with Japan’s industrialization in the late 19th century, the paper industry and related companies converged in urban centres across the country. In the eastern Tokyo ward of Kōtō, one such company is Shinohara Shiko, a family-run bookbinding factory that has been cutting, folding, and binding paper to make books and magazines for almost fifty years. Mastery of this highly specialized trade demands both artistic sense and technical expertise — bringing these elements together successfully produces results with durability and visual appeal.

On paper, Shinohara may seem indistinguishable from other small and medium enterprises that are said to be the hidden backbone of Japan’s printing and publishing industry. However, in the last decade, they have started taking on new work — by collaborating with designers and brands directly, or developing their own product brand with other companies — much of which has garnered awards in Japan and internationally.

This is also why we have chosen to work with them to create our inaugural physical volume, leveraging their decades of expertise in paper manufacturing, extensive network of partner factories, and more importantly their flexible collaborative approach.

We toured the four-storey building that houses their bookbinding machines as well as their new experimental fourth-floor gallery and event space — listening to second-generation head Keisuke Shinohara reflect on his journey of joining the family business, projects he started since taking over, and his deepest motivations.

Tell us a little bit about the work you do at Shinohara Shiko.

I’ve been running Shinohara Shiko for nine years now. Much of our regular work comes from design studios — mainly graphic and product — and manufacturers who are looking to make anything from photobooks, catalogues, magazines, and even stationery.

While we can handle all aspects of production, from printing to bookbinding, most of our customers come to us because they are very particular about an aspect of the production process or the type of binding. That’s something I see a lot.

How has Shinohara Shiko’s work changed over the years?

When I first joined the company thirty years ago, the majority of our customers were printing companies located within a 30-minute drive from our office. At that time, we received orders by fax; the date, delivery date, and price were all set in the order form. It wasn’t motivating work as you just had to produce according to the specifications.

Instead, I tried to find small joys like being faster, having a lower defect rate, or doing a better job than the people around me. But that didn't really solve the issue, so I wanted to do work that only our company could do. As a result, I started to take on difficult projects that no one else could do, causing our clientele to gradually shift, such as when printing companies from farther away sought our services.

Even then, I wasn’t satisfied because there still wasn’t much room for change other than small details. The reason is that here, the designer creates the data, sends it to the printing company, and after printing it reaches us for the processing and bookbinding — which is the final part of production. When they consult with me, it’s usually too late to change the original data.

Wow, that must have been really frustrating for you ...

Yeah, I felt that things were done in a top-down manner, and sometimes I was just ordered to do things. Well, not sometimes — most of the time.

However, I don't think there should be a hierarchy when it comes to production. Of course, we have to take responsibility in our own area of expertise, but I believe that we can make something better if everyone works together side-by-side, rather than just saying yes to whatever the designer says.

About ten years or more ago, when I was still the factory operator, there was a time when I took off my work uniform and went directly to the designer at their studio. I brought my own ideas about how we could work together, and since then our work style has slowly shifted to working with design companies and advertising agencies from the very beginning of each project.

You’re even developing paper products now. What’s the story behind that?

There’s all sorts of different ways it happens — whether it's a collaboration with designers, on our own, or with other factories.

An interesting example is INKAREN, a brand that we started in 2012 with five other companies — one that specializes in letterpress and design, another that focuses on cutting, one that is known for embossing, and the last two are bookbinding factories just like us. We make notebooks, letter paper, envelopes, files, clips, and other stationery.

All the participating companies are factories, so normally we don’t interact with the end user in our normal work. By creating a platform that allows us to communicate directly with the people who buy and use our products, we can improve the quality of our everyday work and increase our motivation. That was the goal that started the project.

‍Wait a second, all these other companies are also in Tokyo, right? It’s interesting to me that there are still many factories in one of the biggest cities in the world.

Yeah, I think that Tokyo is a symbol of Japanese manufacturing. Much of the printing and publishing industry in Japan is centred here as well — the city is densely populated with many factories, each with their own specialty. Even if you looked around the world, you probably wouldn't find a place like this.

In this system, each factory is often only responsible for a particular aspect of production, so they can really concentrate on one technique at a time. This division of labour means that many companies work together to make a single product, ensuring high-quality output.

It was because of this environment that I was able to form INKAREN with the five other companies. Being in Tokyo really fostered the idea of working together as a team, with both customers and partners.

Because it was the easiest place to start working, haha! All I thought about at the time was getting my own car so I really had no motivation when I first joined. Like, if I wasn’t the boss's son, I'd probably be fired the next day.

I'm now reflecting back on how I may have been working at that time. I think of it as repentance for my sins, and now I'm working harder than everyone else.

‍What made you decide then that you wanted to take on the company?

When I first started out as a truck driver picking up the paper needed for binding books, I kept thinking, "I'll quit someday.” I really hated it — I really thought this company was hopeless.

When I was put in charge of the second factory at age 27, I began to think, "Oh, what an interesting job.” I slowly realized that it wasn't the job that was boring, and that if I changed the way I was facing this job, it might change. I started to enjoy my work when I changed my approach to work a little bit.

Back then, there were no young people who wanted to work for a bookbinding company, let alone knew about its existence. I wanted to make this company a place where we could be proud of our work, and somewhere young people would want to work. By that time, I was ready to take over from my father and become the president of this company.

That’s also why I started Factory4F — this space we’re in right now — we needed to make the bookbinding profession known to more and more people. We regularly hold factory tours, and from time to time organize workshops where local schoolchildren can come and touch the machines, as well as events to celebrate the publication of a book. The space is also for our staff too, a place for them to relax or to just have a meal together.

‍I have to ask — what drives you each day? It’s quite rare to see a bookbinding company do so much.

In everything I do, my motivation has been people. It's rooted in seeing people happy when holding something you've made in their hands.

Of course, working with people who love paper such as graphic designers is always a pleasure as they can really appreciate a job well done.

However, it's harder to make something that impresses people who have no interest in paper. People today only associate paper with printer paper, flyers, newspapers — they probably don’t realize the power of a beautiful book or paperback at all.

Take these paper earrings … they were made with traditional bookbinding techniques. To have someone with no interest in paper, for example, touch and hold one of these earrings and say “Wow, it’s beautiful! What’s it made of, by the way? What? Paper?” That’s what drives me — inspiring people around the world by using the company’s skills in bookbinding and knowledge of paper to the fullest.

Also, there’s a deeper goal behind each object we make. We have to ask ourselves, “What is the essential purpose of this product?” If you want to move people, we'll work together with you to make something that can achieve that. I'm very conscious of this shared sense of purpose. ▲ 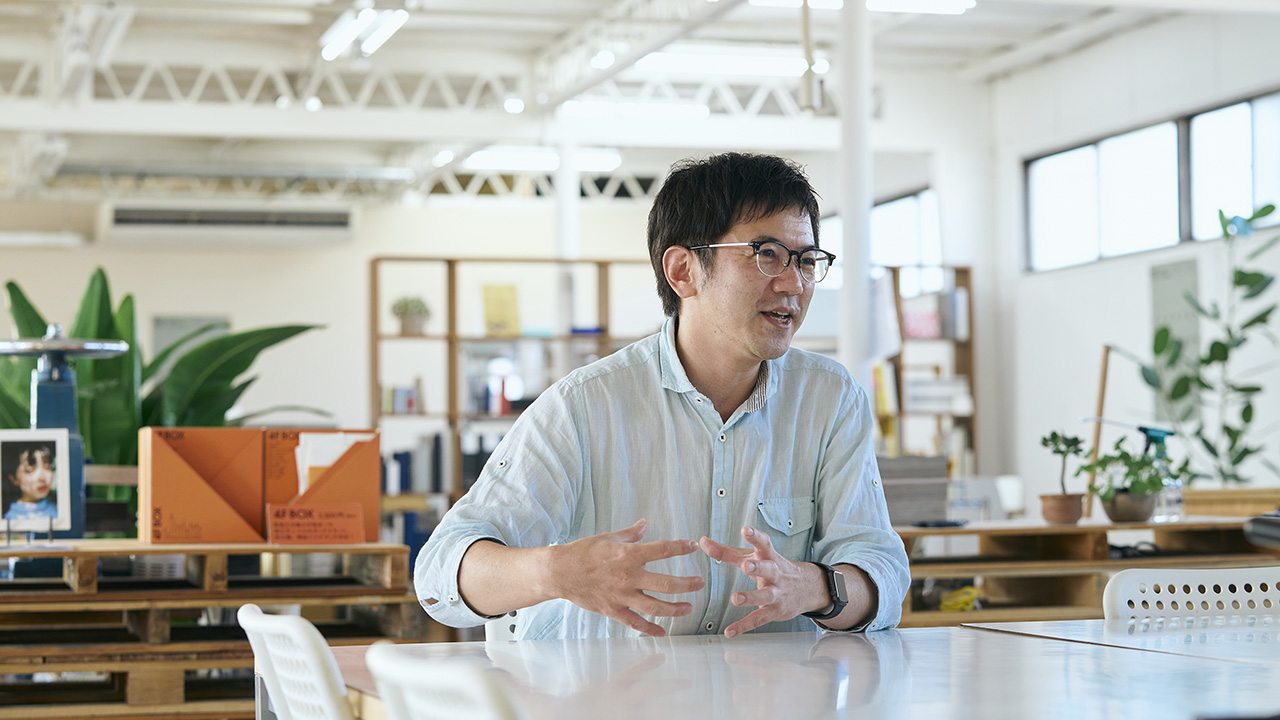 Watch the video
Shinohara Shiko: Making Things Unbound by Convention
This Tokyo bookbindery has been binding books for nearly 50 years. Now they are carving out a niche through design-oriented collaboration and partnerships.