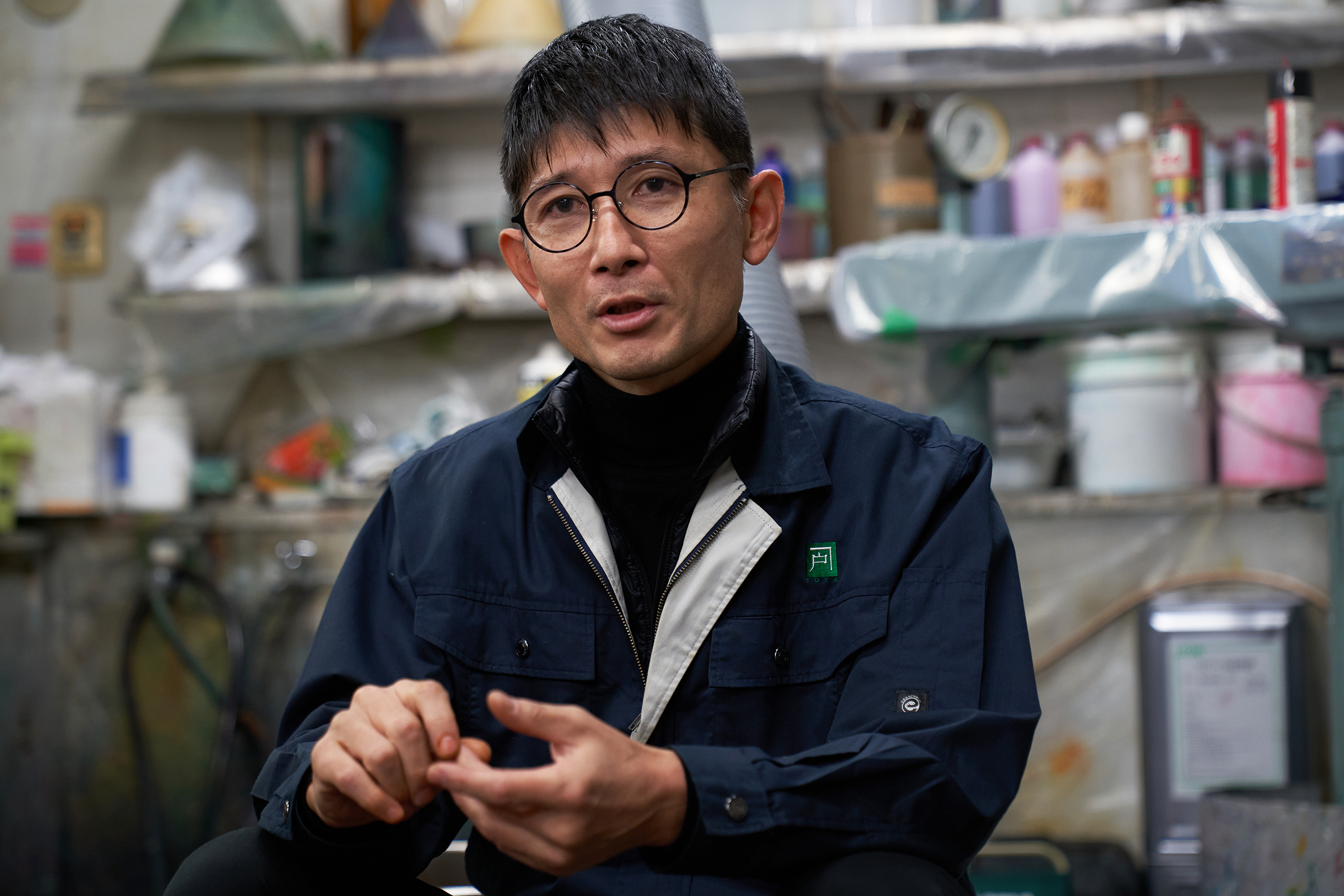 Takenobu Toya, the current head of Toya Senryo, is a fourth-generation dye and pigment specialist. An opinionated innovator, he’s seen his family’s business grow from a simple dye shop in the 1930s to a multi-service industry. Today, with its headquarters in Tokyo’s Asakusa district, it offers custom dyes, colouring research and development, printing services and even some of its own original products.

In 2020, Toya Senryo collaborated with designer Alvin Cheung of Tokyo Keyboard, developing and performing the dyeing process for their newest keyboard that is manufactured in Tokyo. At their head office and workshop in Asakusa, Takenobu shows me a new way of dyeing acrylic, while commenting on changes in Japan’s manufacturing industry.

Tell us about how Toya Senryo got started. Why dye and pigment?

Well, I think my great-grandfather got into this business because he knew he could make a lot of money, haha. Actually though, the company really took off during my grandfather’s generation. During Japan’s postwar economic boom, my grandfather worked really hard. Japan’s textile industry, which required dyes, was thriving back then and, apparently, he made a lot of money.

Were you, yourself, particularly interested in the dyeing business?

Haha, not at all. In the beginning, I wasn’t interested, but my dad asked me to join to help out with some issues the company was having. I think I was kind of fooled into it, haha. I started off working on researching and developing custom dyes, and discovered I was really good at it.

What makes Toya Senryo more than just a purveyor of pigments and dyes?

Well, our main clients are factories and workshops that engage in dyeing and we sell to them. But before we do this, we also conduct a lot of research. For example, we compare dyes and pigments for suitability before proposing them to our clients. We really pride ourselves on our research and development.

What does that R&D entail?

We have over 80 years of experience buying chemical-based products for our work, so we’ve amassed a lot of knowledge, not to mention contacts. This means we can consult and purchase from numerous sources and research what is best for our clients’ needs.

We can deliver dyes or pigments a client needs to produce specific colours, or we can mix them to desired colours and offer them ready made. For individual customer projects, we also develop the entire dyeing process — from pigment or dye requirements to their application.

You worked with designer Alvin Cheung on something experimental for the Tokyo Keyboard project. Could you elaborate more on that?

Yes. Our company deals a lot with dyes for fabrics, and working with acrylic is not that different. Creating and then actually dyeing the two-tone gradient effect that designer Alvin Cheung wanted, though — now, that’s another story.

I’d never heard of it. Actually, acrylic dyeing itself is really niche. I think older generations of craftspeople do it, and they tend to keep to themselves. When Alvin told me he wanted a two-tone ombre effect, something in me told me this could be a fun challenge. Initially, though, I tried to persuade him to outsource the dyeing process to another company, haha.

What changed your mind?

Part way through our discussions, I realized that I had the skills to figure out how to do it myself. I have a creative background — I even went to art school — so I’m familiar with inventive ideas. I found it easy to visualize what Alvin wanted, and I already had ideas on possible techniques. You could say the project reminded me that I am, in fact, good at solving problems and making things, haha.

Yeah, when I saw you do it, it looked like it required a lot of concentration, dexterity, and timing. So how complicated did the process end up being?

Dyeing involves chemical reactions, and that requires a lot of heat. But there are a lot of volatile solvents that can vaporize. There’s also the dye itself, and when that is heated, it evaporates, which in turn changes the temperature and properties of the dyeing mixture.

When we dip-dyed the acrylic, what was interesting – but potentially problematic – was discovering discrepancies in timing. It took only one second in the mixture to create the desired gradient the first time; but after a hour, the change in temperature forced it to take two seconds.

Developing that technique must have inspired future ideas.

I definitely want to take it to the next level. Maybe try a two-color gradation, or a different kind of special dyeing. Perhaps a gradient that starts from the center of a product. I don’t know if that’s even possible, but I have an idea and I’m about 20 percent there. There’s so much potential out there. If designers come to our factory floor to discuss products, so many ideas can emerge.

So you’ve done similar projects with designers before?

There have been a few other times, but, to be honest, this time was quite special. Alvin has a different mindset — he really is focused on the big-picture vision and how each part fits together. I really appreciate that he visited our factory many times and had regular meetings to understand what we were doing. Only people who strive for the very best in quality will do that.

Well, yes…there are a lot of people in Japan gunning for perfection. Sometimes too perfect. But, in the end, it’s nothing without good marketing, which is something Alvin also knows about.

When it comes to colouring or making a product for a customer, up until now, we were only creating things that we thought would sell. Now I work with a business partner who’s experienced in sales and marketing. It’s the way forward — making things that we know people want.

Are you saying that Japan manufactures a lot of things that, despite being well made, aren’t selling?

Yeah, people still make a lot of stuff that no one really wants. I’ve been thinking about that. No one cares if a company thinks it makes “cool” products, or if they think they’re “hot shit.” We should be creating things people genuinely need or want. It’s probably better to first make something that is basic, and then gauge the market reaction to it. Take, for example, crowdfunding. That’s a good way to see what customers desire. If people invest money in a project, it’s because they really want it.

Back to Toya Senryo, given your experience with a designer like Alvin, do you think you’ll change the way you’ll do business?

Being based in Tokyo’s Shitamachi area, we are easy to visit. I think it would be nice if our company had an experiential zone where visitors would be encouraged to try out techniques, learn more about our skills and products and, of course, inquire about purchasing. ▲ 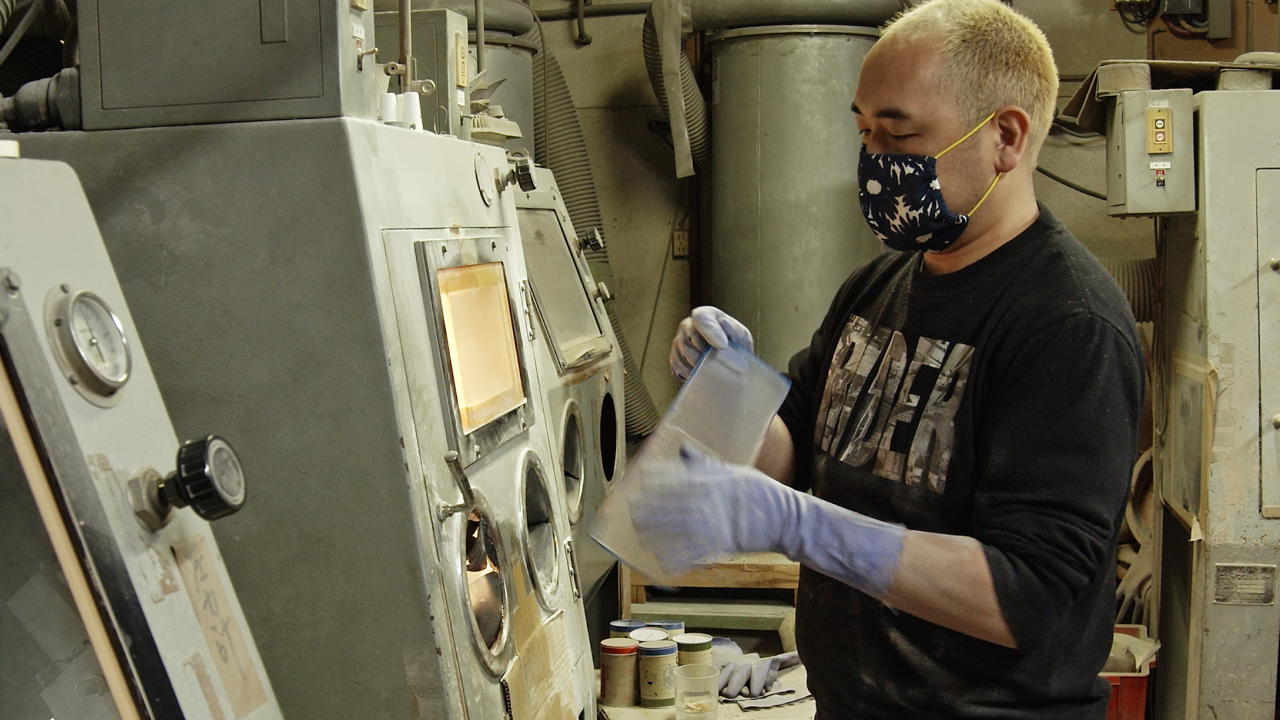 Watch the video
Made With Tokyo
Tokyo Keyboard collaborates with independent urban workshops in Japan to spotlight their manufacturing expertise and create a uniquely local product. 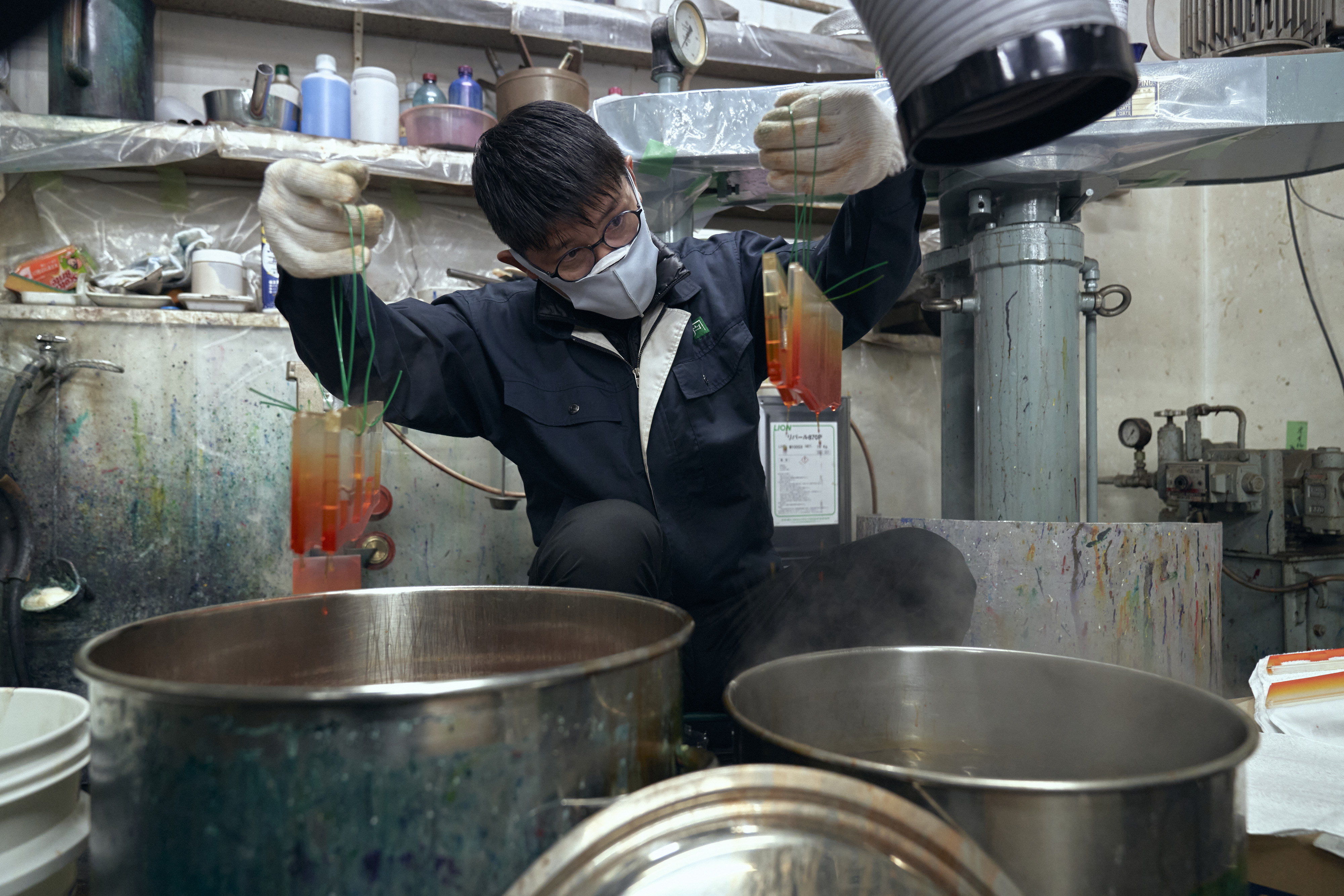 Feature
Made With Tokyo 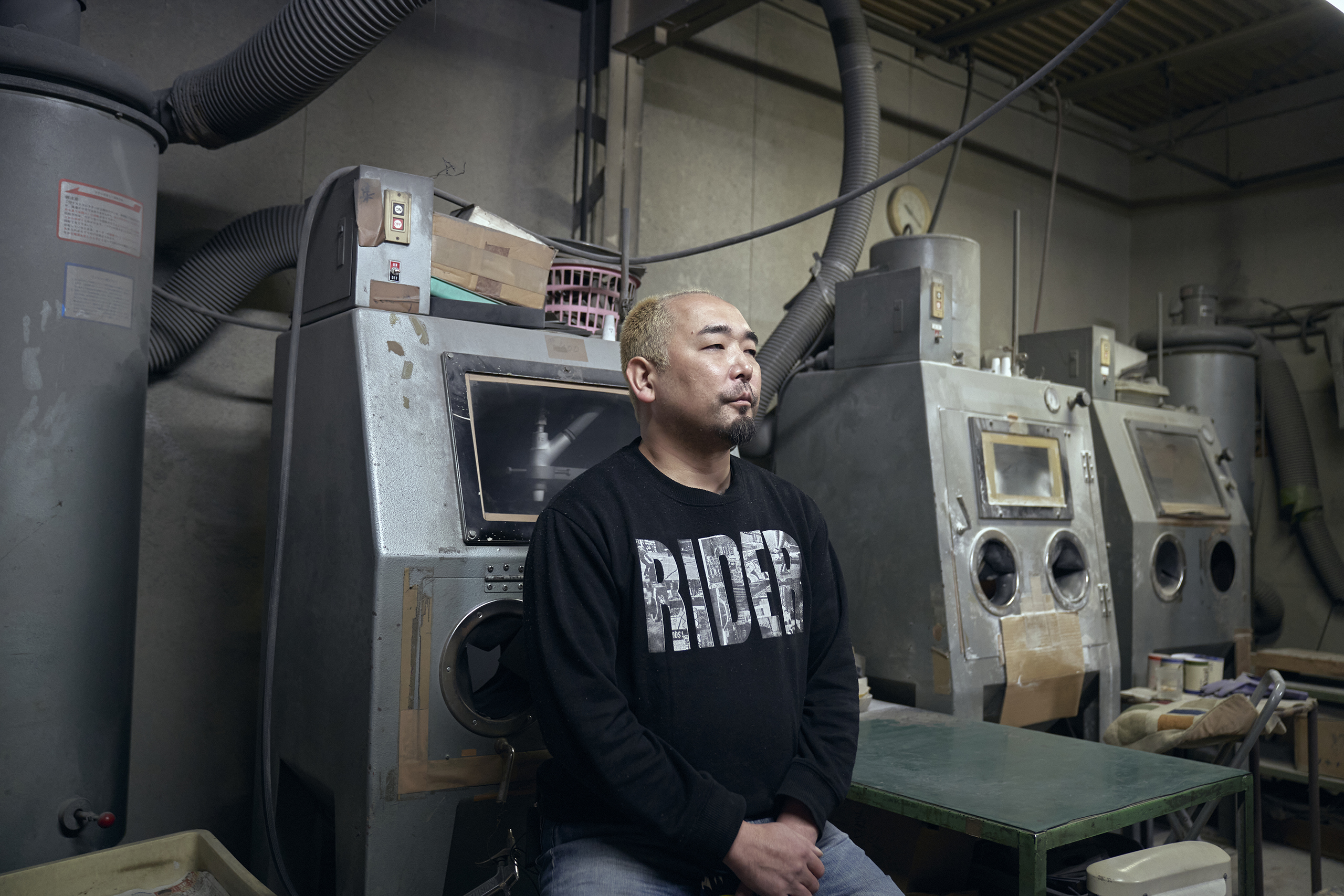 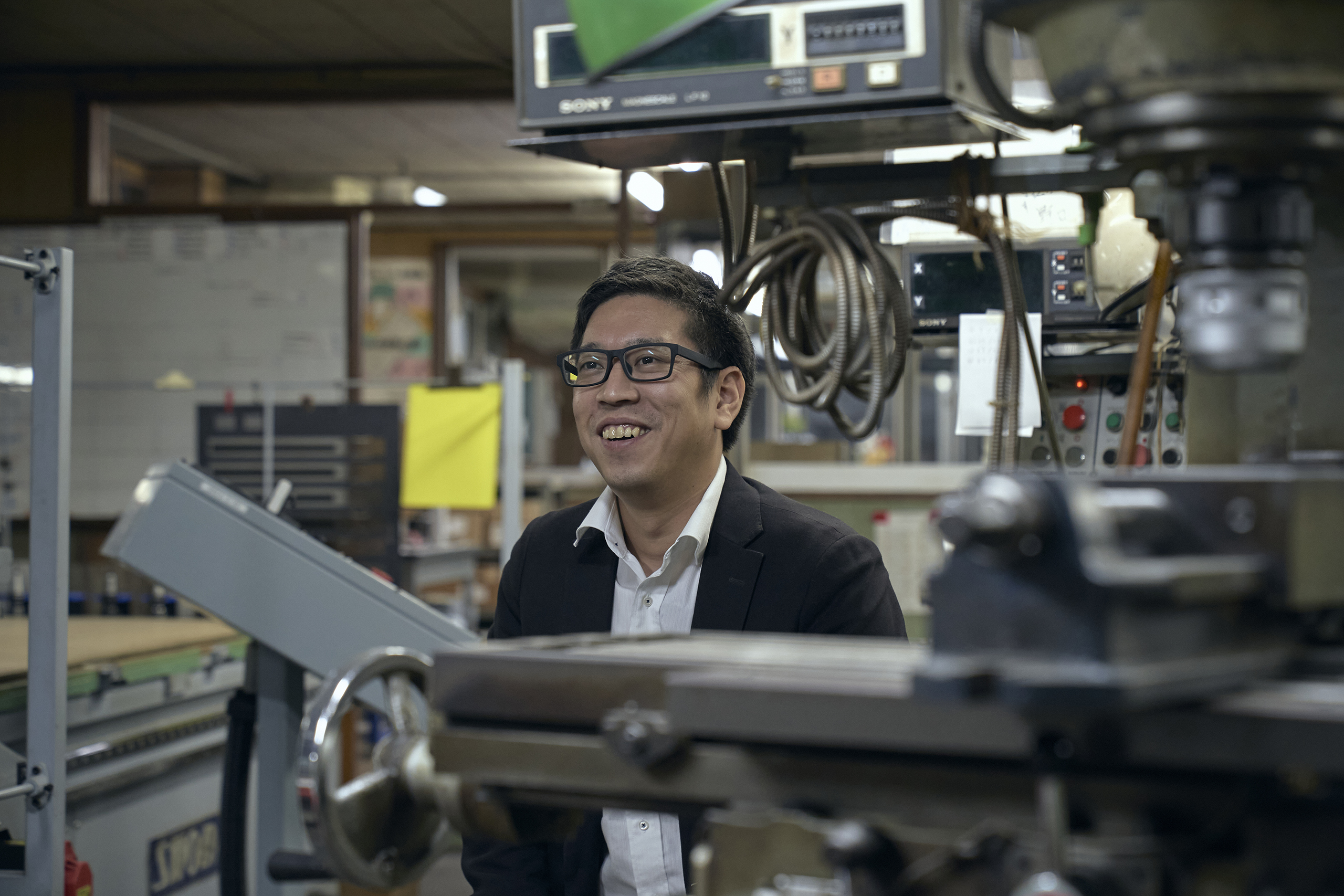